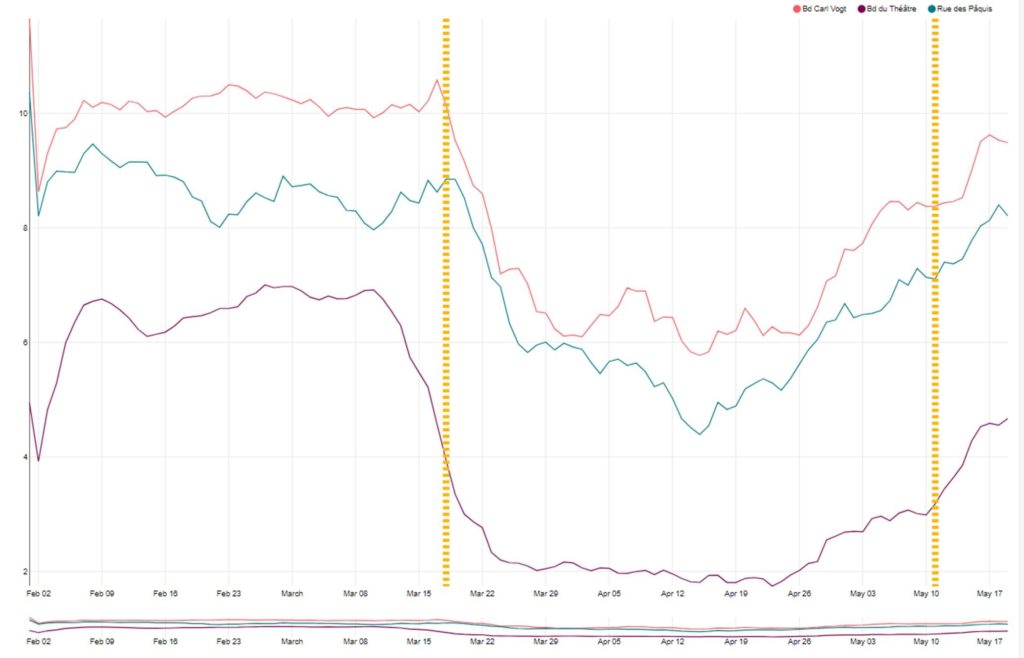 The Covid-19 pandemic had a major impact on our everyday lives. The impact of the imposed confinement period can be measured through many changes in citizen’s habits including mobility patterns.

Thanks to around 650 installed PrestoSense parking monitoring sensors, we have analysed with anonymised data how on-street parking patterns have evolved in different parts of Geneva, Switzerland where a semi-confinement was announced.

We looked at the following parking indicators:

Before the semi-confinement the parking usage in residential areas showed an average occupancy level of 82% with peaks during office hours and an average car turnover rate of 7.2 per day. Parking spots became available early in the morning when residents left their home to go to work. Occupancy increased in the evening when they returned home.

In the same area during the semi-confinement we clearly noticed an increase of the occupancy level from 84% to a near constant level of 93.4% and decrease in car turnover rates from 7.2 to 3.2 cars per day. This data reveals that less residents were leaving their homes to go to work i.e. home office (grey coloured). The graph also shows no evening parking fluctuation with bars and restaurants being closed.

Average occupancy Rue des Pâquis during the confinement period. (between April the 1th and April the 30th 2020)

Before the confinement period we observed an average occupancy level of 39.3% with peaks during office and evening hours and an average car turnover rate of 5.7 cars per parking space per day. High occupancy rates decrease at the end of working days and quickly increase again with people going to restaurants, bars and cultural places.

In the same area during the semi-confinement we see a substantial drop of occupancy levels from 49.3% to 26.6% while car turnover rates decreased from 5.7 to 1.7 per parking space per day. This data reveals that only office workers had been using on-street parking spaces during work hours with near cero parking activity in the evening hours.

Average occupancy Bd. Du théâtre between April the 1th and April the 30th 2020

The graphics below show the evolution of the car turnover rates per parking bay per day in three differents areas before and during the semi-confinement.

As seen above, Bd Carl Vogt (red graph) and Rue des Pâquis (blue graph)are mainly residential areas with a few bars and restaurants around. On the other hand, Bd du Théâtre (purple graph) is an area with offices, bars, restaurants and cultural places.

Car turnover rates drop sharply with the introduction of semi-confinement by mid-May. On-street parking activities have been on low levels during the confinement period before slowly recovering as of end April.

Evolution of revenue per day in Geneva

Parking enforcement has been officialy paused from March 18 to May 27, 2020. This last diagramme shows the cumulative revenue per day during this period in the city of Geneva. The end of the lockdown period is also clearly visible

As available parking spaces in city centers become more and more regulated in an effort to curb pollution levels and reduce congestion, the analysis of parking behaviour is a critical step towards making educated decisions.

Investments into a modern IoT and Smart City infrastructure lay the foundation for a data-driven decision making process rather than relying on vague guesstimates.

The covid-19 pandemic and associated semi-confinement had a significant and measurable impact on people’s parking behaviour and mobility patterns in general.